Maybe you’re not ready yet and you kind of like your life as it is today. That is OK too.. as long as you understand this… and… as long as your partner understands that too. 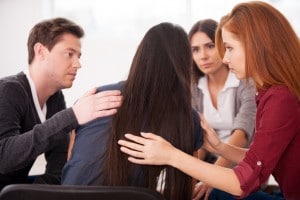 “Time heals all wounds” is often said to people who shortly lost a dear one. “It’s not good when you keep greaving” you hear say when the loss was longer ago. “It’s not healthy when you couldn’t process your loss after so many years” is less often heard.

They say it will wear off, but is that really the case? It could be that the sharp edges of your grief disappear and you are able to live with that. It even could be that you are not aware, even after years, that you are still somehow processing your grief. That doesn’t have to be bad or unhealthy. My point of view is that others should be able to understand this. However, when those others are not empathic then you as a mourner should be able to understand that too. But… there you ask quite a bit from a grieving person. One condition is that you as a grieving person should be aware that you are still processing your grief… but… you might not even realize it!

An example for clarification.

From the first moment they saw each other there was magic between them. It wasn’t so much love at first sight, it went much deeper. It was as if two old souls met and also recognised each other at that level. They joined forces, were deeply in love and got married. Their lives went over high mountains and through deep valleys. People who knew them were jalous of them. A few, however, recognised the depth of their love and the price they both had to pay for that. A price they paid with love.

She died at a young age. He was devastated. He missed his buddy… his soulmate. He burried himself in his job. The work was challenging. Work he could put his heart and soul into. Work that gave him energy, lots of energy, and also was the means in order to be able to cope with his grief. He dreamed a lot about her, they had long talks together and recollected memories. Yes… still… after all those years and relations further. He was married several times now… and divorced again. He had reached a point where he didn’t need a partner at all… he was alone… and kind of happy.

One of his exes requested his help in order to find her current partner who was missing abroad. In his job he had the means and the opportunity to start a search and decided to help her. All end’s well, the partner of his ex was found and everyone continued with their own lives. When saying goodby the ex told him that she regretted their relation was ended at the time because she was unable to “reach” him. He was just as important to his ex as his deceased great love was for him.

It took a while before he understood. In retrospect, this ex was also important to him although in a different manner than his deceased partner. Both regretted the way things had worked out between them, but at the time it was not possible… and even today it is not possible… because they have different lives now as well as other relationships.

Again he dreamed about his great love and this time she told him to let her go. He shouldn’t keep looking back… but he should continue with his life.

There you are… you with the loss of the great love in your life while at the same time you yourself are the great love of your present partner… the thing is though… you are not aware of this. But how can you assure a steady relationship with your new partner without this awareness. What is clear, is that both sides should perceive this.

People are unique and the solutions that might be needed are also depending on place, time and culture. It could take even years before you are able to deal with your grief… and that doesn’t have to be bad. Processing emotions like grief and mourning takes time. Personally I have no value judgement about that; one person can do this faster than the other.

There is no ready recipy for all of us available, but understanding is about yourself and it starts by being aware that something is going on with you. As long as you can’t follow your intuition without even thinking… you can’t help yourself… nobody can help you. Only when you are aware that something is going on, only then you can start taking steps in assessing and solving the situation you’re in. However… is that realy what you want to do? Maybe you’re not ready yet and you kind of like it  as it is today. That is OK too.. as long as you understand this… and… as long as your partner understands that too.