She was done with it. Her life had been a long struggle, a fight against that debilitating disease and against the ignorance of people. She was all done!


She was done with it. Her life had been a long struggle, a fight against that debilitating disease and against the ignorance of people. She was all done!

She had learned a lot in this life. That people couldn’t understand, or couldn’t accept how ill she was and how hard that was for her. Most just said that she was a beautiful young woman. Those people only saw the outside. Those people never saw who she really was.

Despite everything she had done during her life, she had made every effort within her capabilities. She had fought so hard to accomplish everything time and time again. She had learned a great deal in this life. It hadn’t been in vain.

There was nothing more for her to do. She had done everything she could do. She was ready to leave!

She had said her goodbyes to all her friends. That day had been tough for everyone. Not just to her friends and her family, but most of all to herself. She was tired. Soo very tired!

But, something held her back. She still hadn’t said her goodbyes to her mother… and… her father. They hadn’t yet given her permission to leave. They still couldn’t let her go.

She was so tired… real tired. She wanted so badly to start her journey. She was ready to go.

The father went home. He was tired of managing all that was necessary so her friends could say their farewells. It had been one of the toughest tasks in his life. No one had any idea how cruel that task had been to him and how tired he was. Soo tired… dead tired.

As he drove home, she ‘joined’ him in the car to say her goodbye. She was happy that he allowed her to leave. Extremely happy. She was ready with her life on this Earth. She wanted so badly to leave for the other side where she could meet everyone again. Where it would be a feast for her. Without that sick body. Without all those limitations.

Yes, while he was driving home she came for him to say her farewell.

It was a great feeling. As if his daughter was again sitting next to him. He became peaceful… and that moment… she left.

The father was called. He should come to the hospital. It didn’t go well with her.

He saw his daughter in the arms of his wife. A heartbreaking mother… with a broken heart… her daughter had died in her arms.

He saw a joyful daughter in her arms. 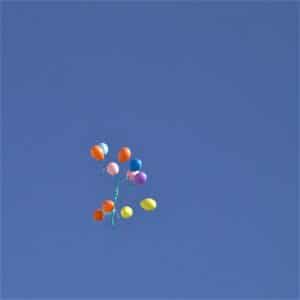 A daughter who was so happy that she was finally on her way. That she was finally rid of that body she had struggled with all her life, that had caused her so many problems. That she had finished a life where so many hadn’t understood who she really was. She was so happy that she had got everything, really everything, out of her life that was ultimately and humanly possible for her… it was okay.

She was happy she was finally on her way. She is a happy… spirit!