A while ago I wrote several blogs about choices and making choices. Shortly afterwards an aneurysm that was sitting in my aorta was discovered. And again, I was facing some probing questions on my path-of-life. As if it had to happen like that!

For every option of the decision I’ve to make, this time I would love to know everything. Everything that awaits me, including all its details and consequences. At the same time, I realize that’s not going to happen… it’s just not possible. An unknown part will always have an impact one way or the other. An unknown part that might turn out to be very important afterwards.

On the other hand, I made many decisions based on total uncertainty. Decisions, that afterwards turned out to be the correct ones. Then, why shouldn’t I take such a decision from the very beginning? In addition to the choices or decisions I had to make… to say it in extreme words… were not about life and death. This time it is about life and death! And this time it’s also about me! Even more reason to thoroughly consider a decision before the consequences are making themselves felt.

A few months later after several tests had been carried out, the specialist’s advice was crystal clear to me. My aneurysm hadn’t grown, and the specialist clearly showed that he was happy with the outcome. While taking everything into consideration he also advised that should an intervention be needed in the future there was a serious chance that I would lose the functionality of my left arm and may even get a paraplegia. To end up in a wheel chair and possibly losing the function of my left arm is not an option for me and not something I’m waiting for.

At that moment I had arrived at a point where I couldn’t go any further with my reasoning. It became clear to that I needed to play by my hunch. What are my needs and what does that mean for me. It was time for real thinking… well, ‘thinking’… about what I’m going to decide should an intervention be required.

When solving complex problems for which I didn’t have an answer immediately, it was always customary for me to bring the puzzle to background of my mind, the unconscious part of my memory, so that I wasn’t confronted with it daily. Also, this time I brought the puzzle to the background of my mind in full confidence that an answer would be found at some point. And, in my mind it became quiet again.

During a yoga-session, some months later, a message came to me suddenly in my mind. A message that came straight to the point. The message was that I am allowed to come Home soon and that I could learn the lessons and to complete the tasks for which I was here on Earth as a human.

Of course, I would like to go Home soon. Going Home, that is the place where all souls or spirits are. Not only because my two deceased buddies are there, but because I’m homesick. Home, the place where True Love reigns! And yes, at the same time I hope that I can learn the lessons and complete the tasks for which I’m here as a human being on Earth. I’m here for a good reason and those lessons and tasks are important. Which lessons and tasks I don’t know, but deep down I feel an urge to learn these lessons and to complete the tasks. It is what it is. Every thought of doubt and fear disappeared, and at the same time it gave me the assurance that whatever happens, it is meant, and it will be all right. 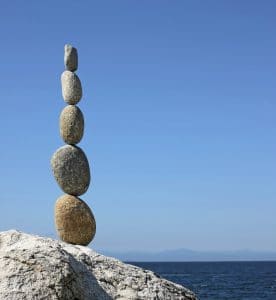 For some reason the choice for leaving the aneurysm for what it is, gives rest in my head. For me that’s the indication that the choice that was made was correct. I’ve learned at an early stage that when a choice made doesn’t give rest in my head… then it’s not the right choice.

However, an answer to a for me personally important question remains: ‘how is it possible that I initially came from a clearly stressful situation… to a choice that gives peace in my mind?’ What steps have I taken? What have I done to get this far?

I will continue with answering this question in part 2 of this blog.