What if we would have been able to process our grief, under guidance or supervision… would my soulmate then still be alive? A question I probably will never get answers to.

On a warm afternoon in October 1978, our daughter Anne Birgit was born in a hospital. We rejoiced that our long expected first child was born.

Our happiness was short lived however. That same evening the surgeon contacted me and asked if I could come over to the hospital immediately. The meconium, the first excrement of a newborn child, was stuck and there was also a first indication that our daughter might have Cystic Fibrosis. Mary-Anne, my partner, wasn’t informed yet and the surgeon asked us if the three of us could discuss the various options… and then decide how we would proceed from there. Time was of the essence. There you are, being parents for the first time of your life… thrown into the deep.

That same evening, our newborn daughter, hardly 8 hours old, had her first operation in her life.

It was also the first time in my life that my world was completely destroyed. Even today, over 40 years after Anne Birgit’s birth, I can still see the images with my mind’s eye how a beautiful future was shattered in one blow! Not only mine world was shattered, Mary-Anne’s too. I can still see the fear in her eyes… I can still hear her crying from the depth of her soul… searching for words. That evening changed both of us forever.

While our daughter was being operated we took an impulsive oath to each other… that, whatever would happen during our lives… we would always stay together and face whatever was thrown to us in the future… we would always be there for each other. At that moment it felt it was important so that a higher power would allow Anne Birgit to live. One way or the other, that oath to each other gave us peacefulness… gave us an unfamiliar energy… no… power to continue. That power was really needed because at that time we hardly couldn’t imagine what was in store for us… how we later had to struggle in guiding our daughter… and that we would get the privilege to bring Anne Birgit to the Light.

Not many people can imagine what we had to live through those 21 years during the life of our daughter. How high the stress levels were and how lonely we were. Anne Birgit became a beautiful young woman who knew very early in her life that she had not many years to live.  Early in her life she made conscious choices and, she tried to get everything out of her life that was humanly possible. Buy because she would have a short life and because she was good looking… at the outside… we met frequently people who couldn’t or didn’t want to accept her illness. It didn’t make sense in our eyes, but we had to deal with it one way or the other. As if our daughter’s illness wasn’t bad enough, the misunderstanding from others did a great job on top of it.

Looking back, that oath we took to each other during the operation of our 8 hours old daughter… that oath kept us together during our 35 years of marriage. Just now, I realize that the energy and the power we received stands for True Love. It guided us through our darkest and lightest periods of our relation. What I also realize is that from all the problems we had to solve, I’ve learned that whatever happens in your life… and it doesn’t even matter how bad it is… you always get support somehow from the spiritual world… eventually, you always get your feet firmly on the ground. It doesn’t happen by itself though… you have to work very hard to make it happen… and you’ve to devote over 100% of your effort all the time… always!

It is said that parents who lose a child are marked for life. That’s true for Mary-Anne and myself, nonetheless different. Isn’t it often said that the loss of a child is not even something you whish to have for your worst enemy? Yes, we agreed with that too… but… on the other hand, the stress levels we had to deal with during the life of our daughter… the angst and the worry that was always there… after her death… that angst and worry… was gone! We didn’t have to survive anymore. Our house became hushed… very silent! And step by step… we got rest in our system… and at the same time… the realization sunk in that our daughter wasn’t there anymore.

With that rest also came unrest again… but this time from a completely different order… the unease to cope with our loss and grief somehow. During Anne Birgit’s life we always had hidden our pain and grief. We had hidden it so deep that we were unable to find and touch it after her death. We understood we had to do something about it… but what, and how… and whom to approach? The family was there too and began to demand attention with as result that nothing came of our mourning… and again… we deeply buried our grief. Yes, burying our grief, we were very good at that… unfortunately. 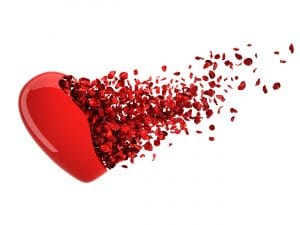 Slowly but surely our grief began to seep through the cracks from the deepest of our being. And in the period that followed we often went through emotionally deep valleys… and at the same time also over emotionally high peaks because we were together and although we had a deceased daughter we have a healthy son. Too bizarre for words… at the same time to go through emotionally deep valleys and over emotionally high peaks. The result was that our family and the people around us couldn’t see… or didn’t understand… that we went through severe times… so severe that in the end something broke. Mary-Anne, my partner and soulmate, died in 2011 of a broken heart.

Was it so intended or… what if we would have been able to process our grief, under guidance or supervision… would my soulmate then still be alive? A question I’ll probably never get an answer to.